Most cars are defined by their engines, others by their style and elegance. In the TT’s case, styling is its raison d’etre. Using the progressive, modern ethos of Germany’s Bauhaus art movement as a starting point, Audi’s designers created a coupe that, like the original TT, incorporates arches and flowing elements to create a unique, timeless form. Audi has eliminated the TT’s multi-tier trim level system and now offers the coupe as a single model with available options. Audi is staying tight-lipped about an official release date; however, rumours suggest the new TT will make its debut in concept form at a major motor show in 2014, possibly Geneva next March.

A major change the 2014 version incorporates is that the 360-horsepower TT RS model is no more. To make amends, Audi has added ambient LED interior lighting, the S line exterior treatment package, and a 12-speaker Bose audio system to the TT’s standard equipment list. In addition to that, the TTS models gain standard adaptive front headlights and heated front seats. 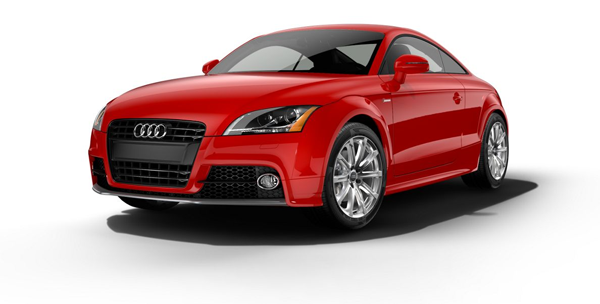 Under the hood, four-cylinder engines will again form the bulk of the line-up, with most TTs sold featuring 1.8 and 2.0-litre TFSI engines ranging from 180bhp to 220bhp. There will also be a cleaner and more powerful version of the existing 168bhp 2.0-litre TDI diesel, capable of over 60mpg. At the top of the range, the TT-S will get an all-new 2.0-litre turbo engine, producing 275bhp and 380Nm of torque. But the former TT-RS will stick with a reworked version of its five-cylinder 2.5-litre TFSI, boosted to around 375bhp. Coupled with a standard six-speed dual-clutch automatic transmission and quattro all-wheel drive, the TT coupe can sprint from a stop to 60 in 5.3 seconds.

For the latest model year 2014, the look gets slightly more aggressive due to newly standard S-Line cues, including sport-design front and rear bumpers, side sills and grille surround. To help maintain the Roadster’s sleek appearance, the multi-layer soft top folds flat into the rear shelf. Generous use of aluminium helps reduce the overall weight and increase the structural rigidity. Inside, the TT upholds Audi’s reputation for finely crafted cabins with a simple yet elegant dashboard and high-quality materials throughout. There’s plenty of room up front, but the rear seats are occasional use units best suited for the short of limb with a bit cramped space for two.

The TT may lack the precise turn-in found with the Boxster and BMW Z4, but the way it holds in corners and its stable, smooth ride make one think that all but the most zealous of drivers will find the trade-off more than acceptable. While the loss of the traditional manual shifter found on the terminated TT RS is certainly a setback, Audi’s S tronic dual-clutch automatic transmission leaves little to complain about. Top up, the TT is fairly quiet for a soft-top convertible, but the feeling inside the cockpit isn’t as secure or polished as with a retractable hardtop. In short, the TT offers a great ride with great power and a great fuel economy.

Given the 2014 Audi TT’s relative rarity, all-weather capability and innate desirability, its base Manufacturer’s Suggested Retail price (MSRP) starting around $41,000 looks like a good value, especially if you are relishing a spot beside the distinctive styling. The TTS ups the figure to just over $49,500, while the Roadster tacks on $3,000 to the Coupe’s base price. That’s still well under a similarly-equipped BMW Z4, Mercedes-Benz SLK or Porsche Cayman, which are naturally the model’s front running competitors.