The Anti-locking Brake System is basically what keeps your car from losing control and sliding your way to the hospital.

It is pretty much self-explanatory, while that is one of the most important parts. As such, you need to have the ability to realize what the Air in ABS module symptoms is. 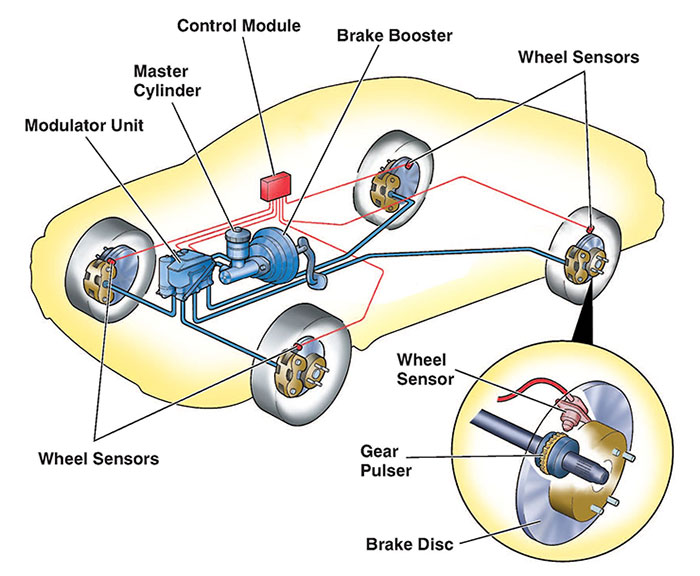 Understanding The Principle of ABS

To properly understand ABS, we need to understand the principle of steering. When you press on the brake, the pads on the wheel disks will be activated. Doing so will stop the rotation of the wheel, thus braking the car.

As the rotation is coming to a stop, the slippage between the wheels and the surface of the road causes friction, which in turn stops the car.

Without getting into too many physics terminologies, the whole concept has to work when all wheels are rolling. So, how does ABS prevent your car from sliding when you are basically stopping the car from rolling with the brake?

The wheels have sensors attached to them and the ABS mechanism is heavily dependent on them. When your foot press on the brake, there is a chance that the brake might (and it will) lock up.

The sensors can sense this, and a modulator unit would then intermittently release the brake pad. This way, the wheels spin intermittently corresponding to the partial releases.

This will allow the steering to function properly, and the driver will be able to steer the vehicle during the braking without sliding. That is the most simplified way of explaining how it works.

So, knowing this fundamental principle behind the ABS mechanism. We can tell what ABS module symptoms when your ABS is not working properly. Below are some of the symptoms you should be aware of.

This is the first and foremost sign that something is wrong with your ABS. It is a built-in engine light for checking if the ABS is working properly by the very designer of the car. If your car does not have an ABS light, the check engine light also can flash. So if the ABS light is on, you can be 90% sure you should get your vehicle to the closest auto-shop as soon as possible.

Potentially, there can be quite a few reasons why your brake is not as responsive as it used to be. If you did read the explanation above, you will know, by now, that in order to prevent sliding, the brake has to work as intended. That is from pressing the pads on the rotating wheels, to the modulator allowing the wheels to spin intermittently. Hence, when the brake seems to be lacking responsiveness and not braking the car properly, you know something is up.
Also, if you notice that it occurs more often and it is progressively harder to brake without pressing harder on it, it is a sign. I highly recommend getting your vehicle looked at your earliest convenience.

This is a rather rare case as the speedometer is known to stop working first most of the time while everything is working fine. Though, if you do see the speedometer stops working all of sudden together with the other symptoms popping up, something is wrong with the ABS.

The ABS system relies on the sensors attached on the wheels to do its jobs, and so does the speedometer. So, when the speedometer stops working, there is a slight chance it was caused by the sensors not working. If that’s the case, that means your ABS isn’t working either.

However, just so you know, there can also load other variables causing the speedometer to stop working. So, don’t panic just yet when you see the numbers aren’t jumping.

Instead, pay attention and look if the vehicle is displaying other symptoms on this list.

As previously explained, ABS is the part of the engine that prevents your car from sliding when you brake. Locking the brake is when you hit the brake, the car starts to slide rather than slowing down or braking.

It occurs because the brake is locking rather than doing what it is supposed to, which is a modulator letting the wheels rotate intermittently to utilize friction to brake the car properly.

When that happens, you should know it is not indicative anymore. There is definitely something wrong with the ABS module.

Another almost definitive indicator which is screaming “please bring me to a doctor” is the noise of metal parts grinding each other.

If the ABS works by pressing the pedals against the wheel to stop the rotation, then metal noises are the product when they aren’t pressing the wheels but themselves.

The pedals are not the only components in the engine that would produce these noises. The modulator, and gear, and other parts not working properly would also produce these grinding noises. Even if there is nothing wrong with the ABS, it is still worthwhile to get your vehicle checked. These noises simply can’t be good,

That’s about it for this article, folks. Of course, you should not just rely on the tricks above. They are only possible Air in ABS module symptoms and, therefore, not definitive (some are).

Regardless, they are helpful indicators as well as being reminders that you should get your ABS checked.

Alright, drive safely, ladies and gentlemen. And I will see you in the next article.