In October this year, Oxford announced its plans to become the world’s first zero emissions city zone – they aim to ban all petrol and diesel cars from the city centre area by 2020. This suggests the UK are serious about rolling out their plans to ban the sale of all new diesel and petrol cars by 2040 in an attempt to clean up the UK’s air quality. Oxford isn’t the only city looking to introduce clear air zones either. The government has revealed five UK cities that plan to have a clean air zone by 2020, including Birmingham, Southampton and Leeds.

Motorparks Grange, retailers of prestige vehicles such used Aston Martin, Jaguar and Land Rover, discuss the future of Clean Air Zones across the UK, and what they mean for drivers: 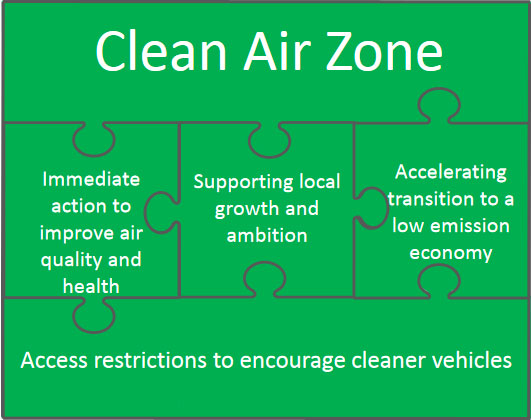 The government defines a Clean Air Zone as “an area where targeted action is taken to improve air quality and resources are prioritised and coordinated in order to shape the urban environment in a way that delivers improved health benefits and supports economic growth”.

The programme implements access restrictions in ‘clean zones’ to encourage cleaner vehicles on the roads. High polluting vehicles such as busses, HGV’s and taxis will be faced with a charge for entering these zones – however, private cars will not be affected by these charges yet. Fully electric vehicles and vehicles which meet the definition of an ultra-low emission vehicles will be exempt from paying entering charges. However, other vehicles are separated into different classes, and charges will depend on which class they fall into.

Where will they be?

The government have chosen areas across the UK that have the poorest air quality. Clean Air Zones expect to be introduced in Leeds, Birmingham, Southampton, Nottingham and Derby by 2020, in an attempt to bring levels of nitrogen dioxide back down to the legal limit. The zones will most likely be introduced in the city centres, and restrictions can involve entry charges, time-of-day restrictions and/or blanket vehicle bans.

Other cities across the UK, such as Manchester, are currently investigating the feasibility of introducing a Clean Air Zone onto their roads. The Sunday Times suggests that over 35 urban areas could be included in this plan, whereby both private and public vehicles could be banned on the roads during peak traffic hours in city centres.

So called ‘toxin taxes’ could be as high as £20 a day in the most polluted cities. However, the government is keen to point out that they don’t want to punish drivers who bought their diesel cars because of successive governments – they don’t want drivers to feel they are being hit hard for incentives that previous governments had encouraged.
Who will be charged?

Originally, not all zones will have fixed charges — these will be decided by local councils and authorities. Penalties are not compulsory for city Clean Air Zones either. However, councils which do implement charges have the right to charge additional penalty fines if drivers do not comply with the zone charges.

Initially, the zones will not penalise private car owners. Instead, the zones will charge drivers of buses, taxis and HGV’s which contribute the most air pollution. Charges have not been finalised yet, but they will be issued depending on which class, or category, your vehicles falls under. There are four classes, A, B, C and D and are identified on vehicle type depending on your emissions and euro standard.

To find out where your vehicle will lie, the government has released a report outlining the Clean Air Zone framework.