Honda introduced a barrage of updates to its Civic sedan after just one year of sales. This act was undoubtedly forthcoming after journalists generally panned the 2012 model, making this update the third in recent memory. Hence now it’s the Civic Coupe’s turn to receive those updates, and we’ll be seeing the new car for the first time at the 2013 SEMA (Specialty Equipment Market Association ) show taking place in Las Vegas from November 5.

The SEMA show is not typically the setting where automakers usually show off their new productions. This is because it is a haven for tuners. The reason behind this decision taken by Honda is because during the 1980s and ‘90s, the Civic Coupe was one of the most idolized imports in the tuning scenario and Honda is hoping to relive those glory days by showing off the new 2014 Civic Coupe at the world’s foremost event for tuners.
Along with the announcement, a teaser image was also released by Honda. Judging from the single image it is discernible that the Si Coupe now features a larger rear spoiler, along with a restyled, more aggressive rear bumper, complete with a diffuser. The taillights look smoked, and the wheels look larger than the current Si’s alloys. 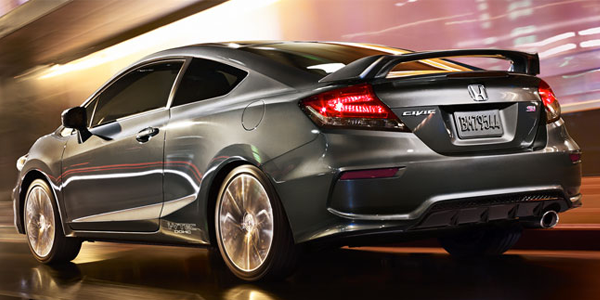 Along with the updated Civic Coupe; the Honda SEMA booth will feature an impressive array of custom cars, motorcycles, even the 133-mph ‘Mean Mower’ lawnmower, along with their title-winning partners, Team Dynamics.