In a little over a century, America has progressed from a horse-drawn carriage serving as the primary mode of transportation to the brink of mainstream self-driving cars.

While the first automobile capable of transporting people was created with a steam engine in the late 18th century, it was Henry Ford who brought the Model T with a combustible engine to the common population in the early 1900s.

The boom of the technological age has brought a significant change in driving habits. Twenty years ago, an atlas and hand-drawn maps were the primary navigational tools. Now it’s in-car navigation systems and smartphones — providing ways out of traffic jams, security if stranded, and confidence to explore like never before.

Technology has also provided cars with things most take for granted such as power windows and keyless entry. Most importantly, technology has improved safety for vehicle occupants.

Here are 13 of the most significant advances in car safety technologies.

From their invention in the 1800s to Volvo’s engineering of the three-point system to today’s technological advancements with pretensioners and force limiters, seatbelts have continued growth ineffectiveness.

Pretensioners tighten the belt in preparation for impact and ensure the safest positioning of the occupant and force limiters give the belt slack to reduce force on the occupant’s chest during a collision.

Some vehicles even have inflatable belts that help spread out the force of the seatbelt during a crash. Those with fragile bodies benefit from this feature most.

The prototype airbag was patented in 1953 by John Hetrick after a near-collision made him realize how badly his seven-year-old daughter could have been hurt and how a device to soften collision impact could have helped, but it wasn’t until the late 1960s after the invention of a crash sensor, that the airbag was first installed in passenger cars. In 1988, all vehicles were required to be manufactured with driver and passenger airbags.

Antilock brakes help the driver maintain control of their vehicle when stopping quickly or on slippery road conditions. While the driver maintains pressure on the brake pedal, the ABS regulates the brake fluid pressure to each wheel which prevents wheel lock-up ensuring maximum braking power.

Like regular cruise control, the driver sets the speed. That speed, however, is the top speed, and sensors in the vehicle will adjust to lower speeds when traffic calls for it. Adaptive cruise control is ideal for driving in heavy traffic. These systems are usually manufactured in conjunction with front crash prevention systems.

Three out of four car seats are not installed correctly. In an effort to help parents install car seats successfully, the  Lower Anchors and Tethers for Children (LATCH) system was developed. Since 2002, most vehicles are equipped with LATCH.

Instead of using the seatbelts to secure a child safety seat, caregivers can secure the car seat’s straps and hooks to the anchors in the vehicle.

Rear-view video systems are now required in all new vehicles in the United States. The system works using a camera on the rear of the vehicle which projects to a screen for the driver to view.

This technological advancement, when used with rear- and side-view mirrors can eliminate up to 90 percent of the blind spot behind a vehicle.

Children and the elderly are significantly more vulnerable to backing up collisions and the effort to protect their lives was the leading push towards the governmental mandate for rear-view video systems.

Traction control typically works with the ABS system. When a wheel spins, such as in wet or icy conditions, the traction control system sends braking power to that wheel. This action then gives the opposite wheel power, enabling the driver to remain in control.

The Future of Safe Driving Technology

The future of safe driving technology is in eliminating human error to ensure the safest driving experience possible for drivers, passengers, other drivers, and pedestrians.

There are several advancements in various stages including:

Using sensors, the brake assist system will apply the brakes when it senses an imminent collision. Some systems are capable of avoiding collisions, others just slow a vehicle down, but even a ten mile per hour reduction in speed can reduce collision impact by 50 percent.

Reaction time varies between drivers, and the brake assist technology can react faster even than a human driver who is paying attention. When the driver reacts by pressing the brake pedal but not hard enough to avoid a collision, the brake assist will give maximum braking power.

This single feature has been proven to significantly lessen impact and help drivers avoid crashes. In fact, Volvo boasts that thanks in great part to automatic emergency braking, their 50,000 XC90 models sold in the UK have not experienced a single occupant die as the result of a crash.

Ninety-four percent of fatalities could be avoided by the driver making a different choice. Those who develop automated technology seek to make the best choice and eliminate human error.

This option takes the lane departure warning a step further and instead of just alerting the driver to the vehicle leaving its lane, it also assists in braking, steering, or accelerating to keep the vehicle in its lane and avoid a side-swipe collision.

The above-listed automatic safety features work independently on the vehicles in which they are installed. V2V communication rapidly exchanges information with other vehicles equipped with V2V.

These vehicles work together to increase the crash avoidance of each vehicle working independently. The National Highway Traffic Safety Administration (NHTSA) predicts that when all vehicles communicate with each other, 80 percent of multi-vehicle crashes can be prevented.

The ability for vehicles to sense their surroundings and send messages to operators or other vehicles depends on a wireless network. Unfortunately, networks can be hacked. With advanced cybersecurity, these threats should be minimized. 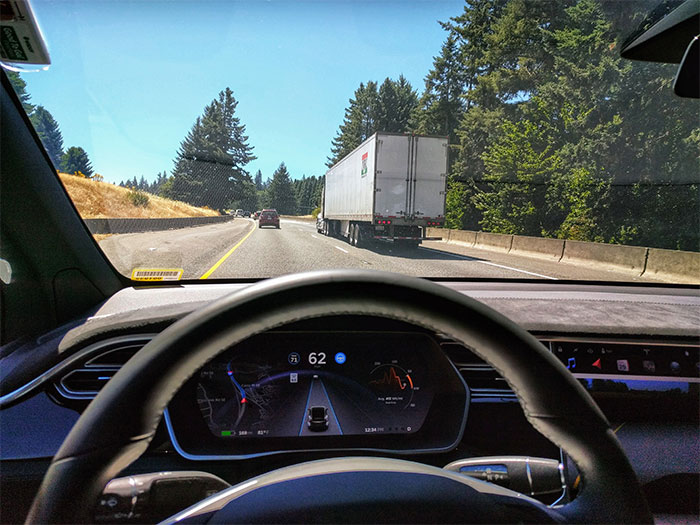 Legislation regarding autonomous vehicle standards and crash liability is still being developed. Time will show the impact these vehicles will have on car insurance companies and individuals who are currently paid drivers.

Avoiding crashes results in avoiding crash-related injuries and death. Safety is the number one goal of all these vehicle improvements. In 2016, over 37,000 people lost their lives in car crashes.

Technology that assists the driver in making the best decision should be a priority for every person in the market for a new or used vehicle. Some of these crash avoiding tools to look for include the following:

Technology has been proven to make vehicles safer for drivers and passengers. The technological advancements that are currently being developed promise marked improvements in safety statistics.

When Henry Ford first manufactured a car for the masses, he could not have foreseen what the car for the masses would look like 100 years later. Drivers today can see the near future of improved safety and access, but no one can predict how much cars will evolve in the next 100 years.

Just as John Hetrick dreamed of a vehicle feature to prevent injury to his daughter, the dream of travel free from risk of injury is the goal that continues to drive innovators.

What technology keeps you safe in a car?

Radar, laser, and camera sensors are used in the forward-collision warning system to keep your car safe.

What are the 5 safety features in a car?

What is the #1 safety device in cars?

Airbags are the #1 safety device.