It seems that for most non-car people, enough never means as much as the producer recommends. This issue is more common in wheel jobs, especially when a service operation requires removal of the wheel from the car. Taking off the wheel is fairly simple as long as you have the necessary tools. You apply enough force on the wrench until the lug nuts loosen and then proceed to unscrew them manually or by spinning the wrench – either option is correct; the choice is just a matter of habit. 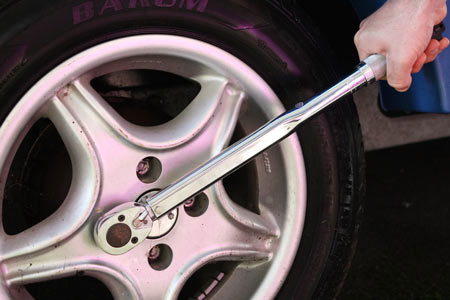 However, when you finish the operation, re-attaching the wheel and fixing it using lugnuts is something most people overdo, as in over tighten. In such cases, a torque wrench proves to be an amazing investment.

Contrary to popular opinion, lugnuts don’t need to be tightened until they screech out on those last degrees of twisting. In fact, checking your vehicle’s service book will reveal that there exist preset amounts of force that must be used in order to tighten lugnuts. Anything above that may not cause immediate damage (although lugnuts have been known to cease under extreme tightening pressure), the wheel may get damaged on long term.

Also, it will prove to be a pain in the neck next time you need to fix a flat or to switch to winter tires. Even a powerful wrench with a long extender may not be able to loosen up over tightened lug nuts, leaving you with just one option: a service-grade pneumatic impact wrench and lost money – which you would’ve otherwise saved by using a proper torque wrench.

Torque wrench – how to use it

So, what’s so special about a torque wrench? Unlike regular wrenches, a torque wrench allows you to limit the amount of force applied to a lugnuts when tightening it onto the wheel. Torque is the rotational force applied on the lugnuts and it is measured in pounds per feet. Applying 10 pounds of force at the end of a 1 ft. long wrench will result in a 10 lb/ft torque.

A pro grade torque wrench is the micrometer “clicker”. This one allows the user to preset a certain torque value on the handle. When the applied torque reached a preset value, the wrench will click loudly announcing that the limit has been reached. While a micrometer torque wrench usually features high accuracy and has a great repeatability rate, it may occasionally go out of focus. Just the same as bending beam torque wrenches, it should be returned to 0 after each use to avoid errors, especially if you are working with sensible engine internals or suspension parts.

Investing in a proper torque wrench will result in a high efficiency in the long term. Quality torque wrenches are less likely to provide measurement errors and are also more resilient to damage and wear.

Always check your vehicle’s service manual before tightening lugnuts. It is important to choose the right torque value for your specific vehicle type: any less and the wheel may come off, any more and the wheel may not come off even when you need it to.