Tesla is a beacon of innovation, a shining example of what we can achieve when human curiosity and engineering prowess come together. Born from the mind of visionary entrepreneur Elon Musk, Tesla has upended traditional notions of what is possible in the realm of transportation and energy. With its fleet of sleek electric vehicles, cutting-edge battery technology, and solar products that seamlessly integrate into daily life, Tesla is leading the charge toward a cleaner, more sustainable future.

It has re-imagined the car as not just a mode of transportation but as a technological marvel, with features like AutoPilot and Over-the-air updates continually pushing the envelope of what is possible. Furthermore, Tesla continues to challenge the status quo with projects like the Cybertruck and semi-truck, proving that electric vehicles can be not only efficient and sustainable but also rugged and powerful. But do you know where are Tesla cars made? 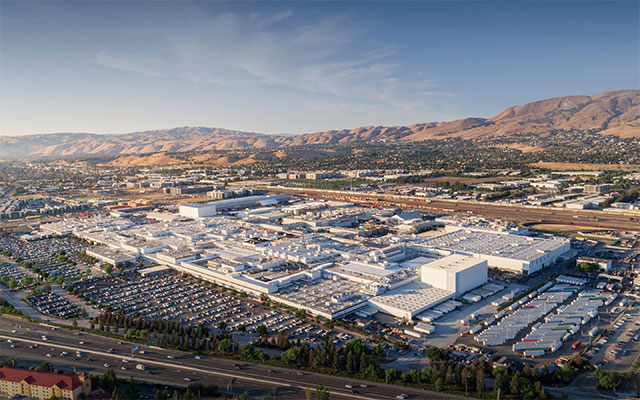 Well, Tesla currently has six manufacturing facilities around the world – four in the USA and two outside its home country.

Where Are Tesla Cars Made?

Tesla boasts a network of production facilities scattered over three continents, each playing a crucial role in bringing their cutting-edge vehicles to the masses.

First on the list is the Fremont factory, nestled in the heart of California. It is where Tesla’s flagship models, the Model S, Model X, Model 3, and Model Y, come to life, each one crafted with precision and care.

Next is Gigafactory 1, located in Nevada, United States, a bustling facility dedicated to the production of battery packs, electric motor components, and energy storage products such as Tesla Powerwall and Powerpack.

In the upstate of New York lies Gigafactory 2, the solar energy subsidiary of Tesla, responsible for producing solar panels and tiles, a testament to Tesla’s commitment to sustainable energy.

Factory 3 in Shanghai, China, is where the automaker produces the Model 3 and Model Y for the Chinese market, showcasing Tesla’s global expansion.

Gigafactory 4 in Berlin, Germany, is the European hub where Tesla only makes the Model Y but also plans to include Model S, Model X, and Tesla Semi trucks.

Last but not least, the newest addition to the Tesla family, Gigafactory Texas, is in Austin, Texas. This state-of-the-art facility is where Tesla makes the Model Y electric vehicles, as well as battery packs and solar products. We also expect the production of Tesla Semi, Cybertruck, and Roadster in the future.

Altogether, these factories are the backbone of Tesla’s mission to accelerate the world’s transition to sustainable energy, one electric vehicle at a time.

Now that you have a brief introduction to each factory let’s discuss them in detail one by one.

A Look At Six Tesla Factories

The Tesla Fremont factory, located in the heart of Silicon Valley, is a true marvel of modern manufacturing. The factory spans over 5.3 million square feet and serves as the main production facility for several of Tesla’s electric vehicles, including the Model S, Model X, Model Y, and Model 3.

This factory is not just a production facility; it also serves as a symbol of Tesla’s mission to accelerate the world’s transition to sustainable energy. Powered by solar panels, it is one of the most sustainable factories in the world.

Inside the factory, state-of-the-art robots and automation systems work seamlessly alongside skilled human workers to bring Tesla’s electric vehicles to life. The factory features an advanced paint shop that uses robots to apply primer, basecoat, and clearcoat to the cars’ bodies, giving them a flawless finish.

The factory also features a state-of-the-art body shop where Tesla builds and assembles the cars’ bodies with precision and efficiency. The body shop uses a combination of robots and human workers to weld, bond, and rivet the cars’ bodies together, creating a strong and durable finished product.

However, this factory is not only about production; it also serves as a hub for innovation and experimentation. Tesla’s engineers and designers work in the factory alongside the production teams, constantly testing new ideas and pushing the boundaries of what’s possible with electric vehicles.

In a nutshell, the Tesla Fremont factory is a true powerhouse of innovation and sustainability, where the company crafts electric cars to perfection and sustainably shapes the future of transportation.

Construction on Giga Nevada began in 2014, and the facility started operations in 2016. The facility would cover an area of over 6.3 million square feet (once complete), making it one of the most significant structures in the world by footprint. As of 2021, the factory was employing more than 10,000 people.

Giga Nevada is a crucial aspect of Tesla’s strategy to bring down the costs of batteries and energy storage products, making electric vehicles and sustainable energy more accessible to consumers and reducing dependence on fossil fuels.

The factory plays a crucial role in Tesla’s goal to achieve full vertical integration and produce most of the components for their electric cars. It would further decrease costs and increase efficiency in the manufacturing process.

Additionally, Giga Nevada is a prime example of the gigafactories concept, aimed at a highly integrated and automated manufacturing process that reduces cost and increases productivity on a large scale. It allows economies of scale that are crucial for achieving mass market adoption of electric vehicles and sustainable energy.

Giga New York, or Gigafactory 2, is a manufacturing facility located in Buffalo, New York, owned and operated by Tesla, Inc. The facility was originally built by SolarCity, a solar panel company that Tesla acquired in 2016. The company primarily uses Giga New York to manufacture solar products, including solar panels and roof tiles. The facility covers approximately 1.2 million square feet and accommodates 1,600 workers (by the end of 2021).

Construction on Giga New York began in 2014, and the facility began operations in 2017. The company built the facility with the help of $750 million in state subsidies and tax breaks. The New York state government wanted Tesla to create over 5,000 jobs over a decade. The factory is responsible for the production and assembly of Tesla’s solar panel products and Powerwall and Powerpack energy storage systems.
Tesla’s CEO Elon Musk highlighted that the factory would help to increase the company’s production capacity of solar products and reduce the cost of solar energy, making it more accessible to more people.

Gigafactory 3 (a.k.a Giga Shanghai) is a state-of-the-art facility in Shanghai, China. It serves as a production facility for Tesla electric vehicles, specifically the Model 3 and Model Y.

The company built this factory in record time, only one year, starting construction in January 2019 and beginning production in December 2019. It is the first wholly foreign-owned car factory in China. The factory utilizes advanced automation systems to increase efficiency and speed up the production process, and it has the capacity to produce over 250,000 vehicles per year.

Tesla powers the factory with sustainable energy sources in order to reduce its carbon footprint and promote environmental sustainability in the region. The facility has a paint shop that utilizes robots to apply primer, basecoat, and clearcoat to the cars’ bodies, giving them a flawless finish.

The factory’s impact extends beyond just Tesla. It also symbolizes Tesla’s commitment to the Asian market and its dedication to the environment. Giga Shanghai’s advancements in electric vehicle production have the potential to revolutionize the entire industry, making electric vehicles more affordable and accessible for the Asian market and beyond. Additionally, the factory has created jobs and economic growth in the region while promoting sustainable energy infrastructure in China.

There are unconfirmed reports that Tesla will allow the Shanghai factory in the year 2023 to manufacture Chinese versions of the Model S and Model X vehicles in order to bypass the high import taxes. Additionally, there are talks that Tesla China plans to develop and create a more affordable Tesla model at the expansion facility next to Giga Shanghai.

Gigafactory 4, also known as Giga Berlin locates in Grünheide, a municipality in the state of Brandenburg, Germany, near the capital city of Berlin. The factory initially expects to have a production capacity of up to 5,000 vehicles per week and currently produces only the Model Y, with expansion plans in the future. Additionally, the factory plans to produce battery packs, electric motors, and other components used in Tesla’s vehicles.

Construction of the factory began in 2020 but was halted by a local court and resumed only in 2021. It caused delays to the expected completion date, and the first car rolled out in March 2022.

The factory has created many jobs in the area, both in the construction and operation departments. Tesla powers this facility with renewable energy and has invested in local, sustainable power generation.

The factory had constructed an extensive water treatment and recycling system to purify and reuse the water used in the operations.

Tesla’s Gigafactory Texas (also known as the Tesla Texas Gigafactory or Giga Texas) is a manufacturing facility in Austin, Texas, United States, operated by Tesla, Inc. The factory currently produces Model Y electric cars, as well as battery packs and solar products. The factory also has plans to produce Tesla Semi and Cybertruck vehicles. The facility includes a factory, office space, and research and development facilities. It is also the first facility to include a Tesla solar panel factory and recycling center. The factory began production in April 2022.

Tesla is also planning to produce its second-generation Roadster at its facility in Texas. The company focuses on making Austin, Texas, its main manufacturing center. Tesla is also set to build a production line for the 4680 battery cell here. Moreover, the company plans to make upcoming Cybertruck and Roadster models with the new structural battery pack technology and larger battery cells.

Tesla has rapidly expanded its production capabilities in recent years to fulfill the growing demand for electric vehicles. The company plans to build additional factories in other regions worldwide, including Europe, Asia, and Africa. It will help the automaker better serve customers in those regions and reduce the cost of shipping vehicles between regions.

Tesla also plans to continue to improve its manufacturing processes, intending to produce cars more efficiently and at a lower cost. The company has been investing in new technologies such as automation and robotics, which will help to increase production speed and reduce labor costs.