If you seek to buy a reliable, safe, and comfortable full-size pickup truck in North America and around, the Tundra is one of the best options in the segment. In fact, TrueCar lists it at the top of the best full-size trucks of 2023, beating Ford F-150, RAM 1500, F-150 Lightning, Silverado 1500 LTD, and Nissan Titan. Regardless of that, you may ask what the best Toyota Tundra year is.

Well, there is not one but quite a few Tundras we call the ‘Best’ courtesy of various awards from Kelley Blue Book, J.D. Power, etc. Besides, Consumer Reports’ average predicted reliability for the Tundra is excellent. The organization predicted an average reliability rating of 4.4 for the first-generation Tundra (2000 – 2006) and 4.2 for the second-generation (2007 – 2021).

Just like its smaller counterpart, the Toyota Tacoma, the Tundra also excelled in iSeeCar’s study of vehicles that most probably will last more than 200,000 miles. The Tundra landed at number five on the list of longest-lasting vehicles overall, with an impressive 2.9% average. In the truck class specifically, it came in at a close second.

The Tundra’s reputation for longevity is further solidified by the RepairPal Reliability Rating of 3.5 out of 5.0, which places it as the 6th most reliable out of 17 full-size pickups in its segment. When analyzed against other trucks in the same class, the Tundra stands out with its above-average dependability, outpacing the average of 3.0 out of 5.0 for other full-size trucks. The Tundra is indeed a truck built to last.

Born in the year 2000, the Tundra was small but mighty, ready to take on any challenge thrown his way. It was a fierce competitor, always ready to prove itself against the other full-size trucks like the Ford F-150 and the Chevrolet Silverado.

As the years went by, the Tundra grew bigger and stronger. In 2007, it underwent a transformation and emerged as a second-generation Tundra. It was larger and more powerful, featuring a new design. It was the first Tundra to be built in Toyota’s new plant in San Antonio, Texas.

In 2014, the Tundra underwent another transformation, and the third generation was more aerodynamic, fuel-efficient, and with improved towing capabilities. It came equipped with new advanced safety features and technology, making it a more formidable warrior than ever before.

In 2022, the Tundra entered the fourth generation with a completely new design and two lively powertrains, including a hybrid. With advanced safety and technology features and more power & towing capability, the Tundra is ready to continue its legacy as a trustworthy and reliable warrior in the land of trucks.

Discover the best Toyota Tundra year for your needs. Learn about the top-rated model years for performance, reliability, and value. Find out which Tundra is right for you and get the most out of your pickup truck.

When it comes to dependability and honors, the 2013 Toyota Tundra stands out as the cream of the crop. Boasting a perfect reliability score of 5 out of 5 from Consumer Reports, 88/100 from J.D. Power, and earning high marks for customer satisfaction, it’s no wonder that this model year was a favorite among consumers. The 2013 Tundra also performed exceptionally well in road tests, receiving top marks for both acceleration and transmission. And in terms of customer complaints, the 2013 model had one of the lowest numbers of reported issues, with the most common concern being related to steering. 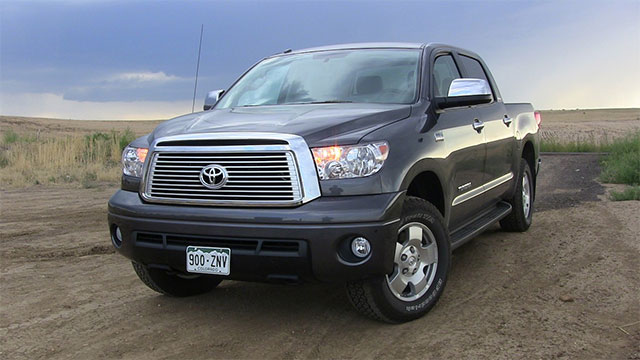 But the accolades for the 2013 Tundra don’t stop there. The U.S. News & World Report bestowed it the “Best Full-Size Pickup Truck for the Money” award and ranked it second in its category, earning an overall score of 8.5 out of 10. The truck even made the list of “Best Used Full-Size Trucks under $25k.” All these factors make the 2013 Tundra the clear choice for the “best” model year.

But if you’re set on owning a Tundra, don’t worry about limiting yourself to just the 2013 model year. The Tundra’s consistency in reliability extends to the 2013-2017 model years, as carcomplaints.com has stamped it with “Awesome.”

The 2013 Tundra came with a new navigation system and gave buyers platinum and TRD Rock Warrior model options. It also received a Top Safety Pick award from the Insurance Institute for Highway Safety and an overall four-star rating (out of five) from the National Highway Traffic Safety Administration (NHTSA).

If you’re looking to purchase a used Tundra, you’ll find plenty of options on the market, but finding a 2013 model year at a lower price might take some digging. Most are still soaring nearby the $20k mark.

2018 is another best Toyota Tundra year courtesy of its outstanding predicted reliability ratings (5 out of 5 from Consumer Reports and 4.5 out of 5 from J.D. Power), standard Toyota Safety Sense Package, stout V8 engine choices, and spacious seating. The TRD Pro trim is also available with impressive off-road abilities. 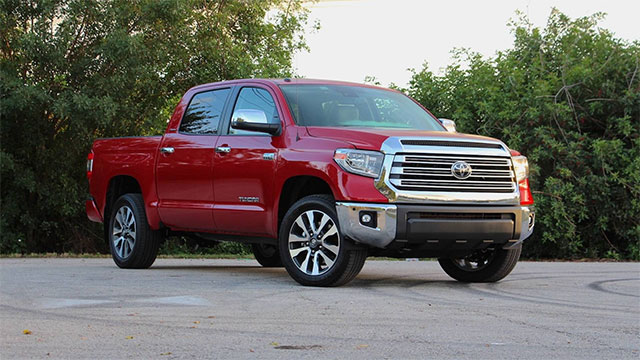 If the standard features like a 6.1-inch display with six speakers, cruise control, and Siri Eyes Free do not strike you, go for the optional 7-inch display with a 12-speaker JBL stereo, the Entune app suite, navigation system, dual-zone automatic climate control, and a moonroof.
The two engine options include a 4.6-liter V8 with 310 hp and 327 lb-ft of torque and a 5.7-liter V8 generating 381 hp and 401 lb-ft of torque. Rear-wheel drive is standard for everyday users, but we recommend four-wheel-drive for the guys yearning to hit the beaten path.

Other highly desirable features comprise a towing ability of 9,800 to 10,200 pounds, a TRD Off-Road package, and a TRD Sport package.

When it comes to ruggedness and dependability, the 2009 Toyota Tundra is the truck that immediately springs to mind. Boasting a variety of robust engine options, including a 4.0L 6-cylinder and two 8-cylinder choices, the 4.7L and 5.7L, this Tundra had no shortage of power.

One of the Tundra’s most notable features was its impressive towing capacity, outpacing competitors such as the Chevrolet Silverado and Dodge RAM by being able to tow up to 10,800 lbs. 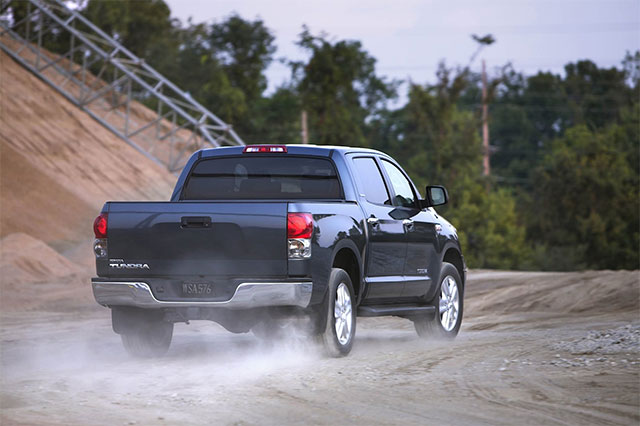 Earning high praise and accolades, the 2009 Toyota Tundra was, and still remains, a top pick among full-size pickup trucks. Even the U.S. News, the reputable vehicle review source, tied it with the 2009 Ford F-150 as the best option available. While the agency gave it a healthy 8.9 out of 10, J.D. Power predicted its reliability rating at 5 out of 5.

The Tundra excelled in its strong engines, superior towing ability, and exceptional safety scores – often overlooked in the pursuit of brute strength in a pickup truck.

It’s remarkable for a pickup that’s only been in development for a decade to receive the highest rank from different research organizations. The only downside we could find is the somewhat plain interior, but overall, the 2009 Toyota Tundra performed exceptionally well and is a dependable choice. Even in terms of appearance, the Tundra managed to hold its own, making it a top pick for the best Toyota Tundra year.

The 2008 Toyota Tundra Limited Edition is the ultimate truck for the year, boasting all the standard features of the regular 2008 model and then some. In addition to the SR5 package, this top-of-the-line Tundra comes equipped with luxurious leather front seats and a robust towing package complete with all the bells and whistles. 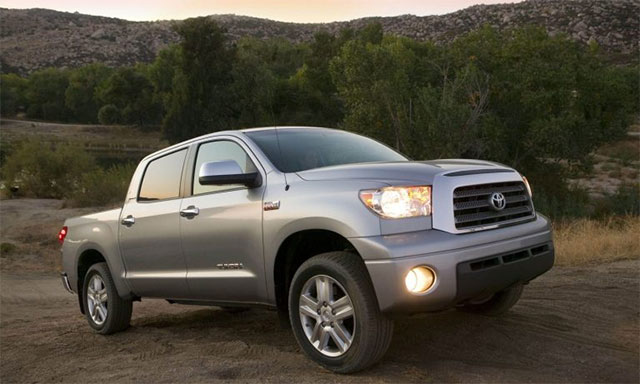 But the praise for this Tundra doesn’t stop there. Motor Trend has deemed it the “Truck of the Year” award, and it received glowing reviews from consumers. With an overall CR ranking of 5 out of 5 for customer satisfaction and reliability, Five Stars from J.D. Power, it’s no surprise that a whopping 81% of owners would repurchase this model. These three factors alone make the 2008 Tundra Limited Edition a pickup worth considering for any truck enthusiast.

The year 2000 marked the beginning of an era when Toyota unveiled its first Tundra series to the world. The first generation of this mighty truck not only put the competition on notice but also set a new standard for how trucks should be built. With a lineup of nominations and awards, the Tundra made a powerful entrance into the market, challenging the dominant trio of Chevrolet, Dodge, and Ford. 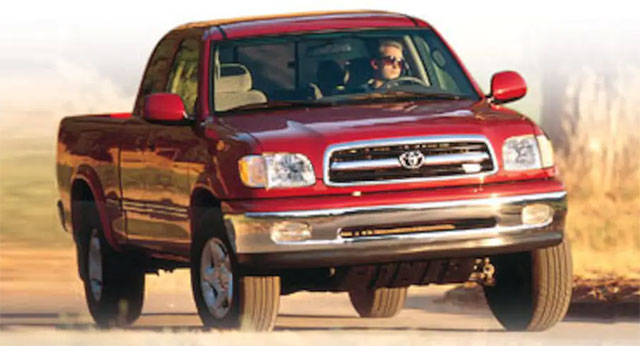 Created a tad bigger than the T100, Toyota made the 2000 Tundra to serve as a big truck that could easily tackle the most challenging jobs, matching the capabilities of its conventional rivals. That year, Toyota developed a total of 120,000 Tundras, offering a choice between a 24-valve 3.4L V6 engine creating 190 horsepower and 200 lb-ft torque or a 32-valve 4.7L V8 engine delivering 245 horsepower and 315 lb-ft torque. We do not have any rating for the 2000 Tundra, but it was the starting point of a legacy, a first step toward a future of powerful and reliable trucks.

Now that we have given you our five best model years of Tundra, we really want to mention one worst year you should avoid.

When it comes to the 2007 Toyota Tundra, it’s best to keep walking – there are far superior options out there. With a bad score of 3 on both Consumer Reports’ predicted reliability and customer satisfaction scales, the 2007 model falls short of Tundra’s typical standards. In fact, out of the Tundra’s 22-year history, only 2002 and 2007 Tundra models went below 4. To make matters worse, the 2007 Tundra also holds the dubious distinction of receiving the most owner complaints, clocking in at a total of 69. 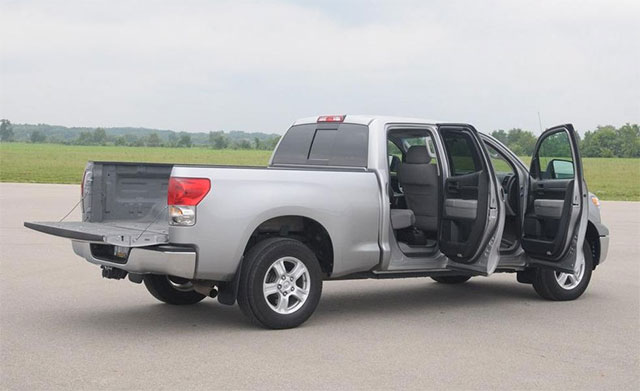 The most prevalent grievances lodged against the 2007 Toyota Tundra revolve around powerplant problems, which can be costly to repair. Motorists identified problems such as a faulty air injection pump, colliding pistons when cold, a jammed air pump & air valve, halting when driving, and unexpected unintentional acceleration. Owners identified most of the problems appeared when their Tundra was reasonably new, with repairs running as high as $3,000 for a defective air injection pump.

Given all this, we strongly advise steering clear of the 2007 model year. If possible, we suggest dodging model years 2005 through 2008 because they were quite a pain for owners.

The Toyota Tundra is generally a reliable truck and has earned a reputation for its dependability and longevity. In Consumer Reports’ predicted reliability ratings, the Tundra has consistently scored well, with most model years earning a rating of 4 or higher out of 5. J.D. Power also gave excellent reliability ratings to some Tundra models (we have mentioned them above).

Additionally, the Tundra has received positive reviews for its overall performance and build quality. However, as with any vehicle, the reliability of a specific Tundra model will depend on the year, trim level, and individual model. It’s also worth noting that some model years, such as 2007, have received a lower reliability rating and many owner complaints, so it’s always good to research a specific year before making a purchase.