Ford EcoSport is the latest addition to the ever increasing list of Sport Utility Vehicles. Today Ford announced the initiation of production of EcoSport in their Thailand manufacturing Facility in Rayong. The Thailand plant production is aimed at fulfilling the customer’s demand in the South East Asian market. With this Ford confirmed the fact that the sales pattern of their latest release is moving in the positive direction. Ford EcoSport is a restyled version of EcoSport 1st generation which was manufactured and released in Brazil in 2003. Since the reinvention, Ecosport sales have hit a new high is currently a hot seller.

EcoSport boasts of a triple cylinder,1-litre turbocharged EcoBoost petrol engine developed in the United Kingdom. The power output is an envious 118 bhp(88 kW; 120 PS) and peak torque start at 1300 rpm thanks to the Ti-VCT  (Twin Independent Variable Camshaft Timing) feature, further glorifying the already full list of potentials. Other major points of attraction boosting the customer’s interest in EcoSport are high driving position, superior fuel economy, a sunroofand superior interiors. Such features have made EcoSport an ideal choice for city as well as mountain driving. 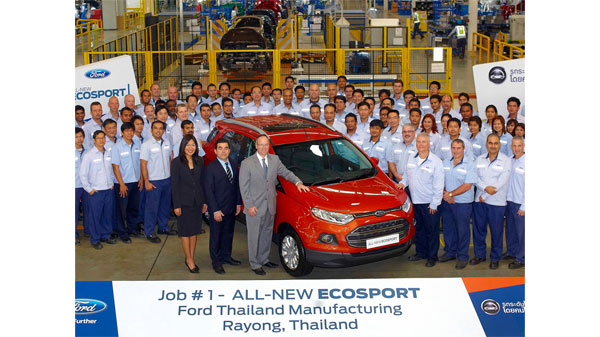 The all new Ford EcoSport is available in  a highly cost-effective price range of 6.20 – 9.75 lakhs INR. Other features of interest include hands free calling and music system, great mileage 22.7 kmpl (1.5L Diesel) according to ARAI and centrally mounted LCD screen. All in all Ford Ecosport is the car to go for with no competition at any level in the current market.