The most favorable and luxury auto manufacturer company Nissan started a campaign in different countries of Europe and the Dutch town of Linschoten decided for the name as the most switched on in Europe. This campaign is for the electric driving and for this Nissan provided the Quick Chargers to this town that the owners of the vehicles can charge their vehicles batteries 80 percent capacity in just 30 minutes. Nissan gave the name to this campaign as the, The Big Turn On. 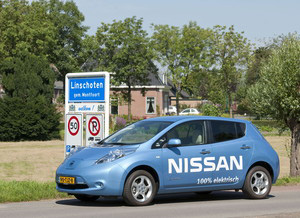 The Big Turn On was designed to encourage the consumers from the different countries of Europe like as France, Germany, Netherlands and UK. All these efforts were started to consider the benefits of zero-emission driving and for the popularity of Nissan LEAF as a safe, reliable, economical and environment friendly car. The chargers installed in the town on different places for the facilities of the consumers and the starting plan was to get one million people to click the ‘The On’ button website within 100 days but the campaign became much popular and Nissan got this target 16 days ahead of schedule, on 21st June 2012. Nissan planed to donate CHAdeMO standard Quick Chargers to Linschoten are among 400 in different cities of Europe by the end of FY2012 to progress their infrastructure development. The Netherlands and France have already selected for this task and the first Nissan Quick Chargers have already been installed their.