It’s every driver’s nightmare; a car crash resulting from losing concentration for just one second. Even a split second’s lapse in concentration can have catastrophic results and cause drivers to respond badly to a situation. Oncoming traffic, pedestrians and even buildings are all hazards which need to be avoided but sometimes, there are circumstances which conspire to make drivers take their eyes off the road and even their hands off the wheel and it’s then that disaster can happen. 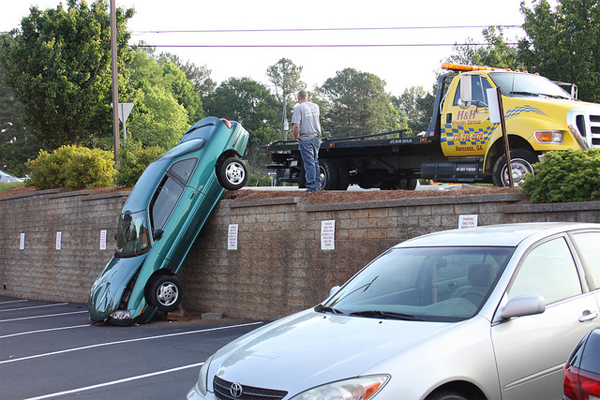 To arm yourself better in the fight for road safety, learn more about the top ten distractions which cause accidents and crashes on our roads.

That’s correct…the top distraction which causes crashes on our roads is completely avoidable. Drivers indulging in an early morning coffee or even a full-on takeaway meal are the number one cause of distraction based crashes at the moment. If you need to eat or drink, don’t take your life and the lives of others into your own hands and risk death or injury. Pull over, visit a café…take five and eat away from the wheel.

Another completely avoidable distraction is people flicking through their music collection when their eyes and hands should be elsewhere. Dancing is also a culprit. Put a selection of tracks on at the start of your journey or listen to the radio…but don’t play the DJ when you should be driving.

Making and taking calls and texts is illegal whilst driving and you need to pull over if there is a call which is urgent. Don’t risk lives.

Slowing down to look at an accident is the fourth most common reason to end up in one yourself! Accident scenes are by nature hazardous and cars coming behind you may not realise your intentions. Don’t slow down and don’t stop unless requested to do so by emergency services.

Texting takes a great deal of concentration and that’s concentration which you can’t afford if you’re meant to be driving. Don’t send text when you are behind the wheel.

Whether it’s the excitement of a new car or just the unfamiliar controls – if you’ve not driven a car for a long period take a time to get used to it. We’d suggest at Frontierleasing to get to know where all the buttons and instruments are and also to know the engine – it may be more or less powerful than you’re used to and this can cause issues.

Touching up the lipstick or mascara is all very well but some drivers admitted to applying their entire day’s makeup whilst on the road. This is extremely dangerous and needs to be avoided at all costs.

Incredibly there are a number of people who are happy to update their Facebook status whilst driving. This is a major distraction and completely avoidable. Tweeting is another social media habit to blame for accidents which could easily be avoided.

The fact is that many of these causes of crashes are totally avoidable and drivers should never take the risks which they bring. Anything which takes your eyes and hands off the task of driving is not something which you should indulge in no matter how short of time you are. It is better to be a little late than dead.