Nissan has launched its latest creation in the United Kingdom, a ‘Note Boat’ along the lines of  the Fiat 500 personal watercraft or the MINI Cooper Convertible boat. The launch is said to be making ‘waves’ in the automobile industry.

In more realistic terms it is essentially a standard Note vehicle that has been parked on a floating platform and is ‘driven’ by rowing. Due to Nissan’s association with Team GB in the 2012 Olympics, the Note Boat was rowed for the first time in public by 2012 Olympic gold medalists Helen Glover and Sophie Hosking as well as 2013 World Rowing Championship coxless pairs winner Polly Swann, who described it as a ‘novel experience’. The whole exercise took place on the Eton Dorney Lake near the village of Dorney, Buckinghamshire in England, which was a 2012 Olympic venue. 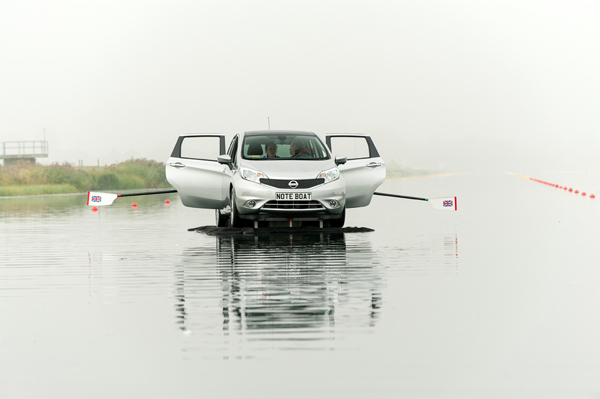 To make this exercise possible, Nissan has made some modifications to turn its new Versa Note hatchback into a makeshift rowing shell. The car’s rear seats were replaced with a sliding rear rowing seat, modified the doors to open wider at 90 degrees and fitted a pair of oars, and enabling Polly Swann to achieve almost a complete rowing stroke. It also has four cameras; one in the front, one at the rear and one under each door mirror to give a helicopter-style, top-down view. In addition to that it also gives lane departure warning, blind spot warning and moving object detection using a rear view camera. 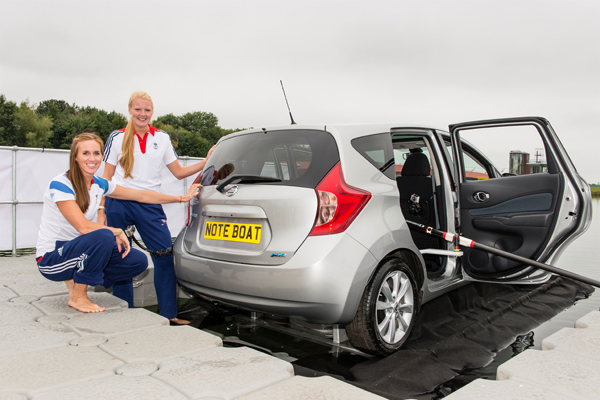 Nissan, it seems, has some intriguing things planned for the Note Boat in the foreseeable future. Apart from that, the road-going Note, deliveries for Europe started on October 1, and the B-segment rival has already made some waves with a huge success with some 3,860 cars ordered. 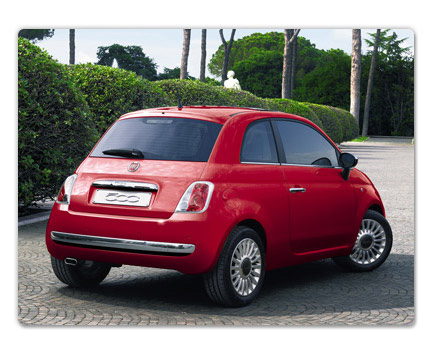