Of all of BMW’s recent concepts, none are as daring as their pair of low emission “i” vehicles, the i8 and the i3.  Although they do seem to be quite similar, actually they are quite set apart in their uniqueness. The 2013 BMW i3 concept is completely using the full electricity power; while the 2014 BMW i8 concept is using partial regular engine and electricity. Another difference is that the i8 seems more to be built for the sporty drive while the i3 is made for the urban ride.

Heavily marketed by BMW as a ‘progressive sports car’, the i8 made its world premiere at the 2009 Frankfurt motor show. At the time, it was sporting a diesel-electric hybrid drive system. However, it has since made way for a gasoline-electric setup with quite a few of its components, including its main electric motor, along the lines of the i3’s electric system. Like the i3, the i8 can run in pure electric mode, but only for 22 miles and up to 75 mph, owing to its relatively small battery.

The main source of all the power is the 1.5-litre, turbocharged, three-cylinder petrol engine, which will also go be making an appearance in the next Mini. It can be found sitting across the back of the car, driving a six-speed automatic gearbox and the rear wheels. Moving on to the forward area, under the middle of the cabin is the fuel tank and then the 220lb, 7.1kWh lithium-ion battery pack. Between the front wheels is BMW’s own 129bhp/184lb ft AC electric motor driving them via a GKN-made, two-speed transmission. That means the i8 is not only fast (155mph) but also accelerates briskly (0-62mph in 4.5sec).  So unsurprisingly, the i8 boasts a range of 310 miles or more between the charged battery and the gasoline tank. 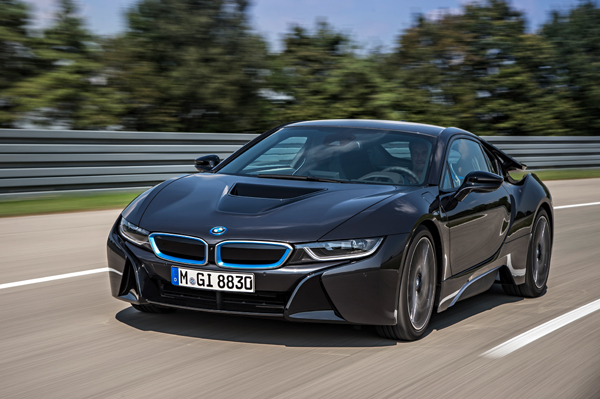 The BMW i8 is seen as a two-seat sport coupe with swing-up doors; its body shell, made of carbon-fiber reinforced plastic (CFRP), is supported by an aluminum chassis that not only absorbs the frontal crash energy but also houses not one but two powertrains. Length, width and height of the i8 are 184.6 inches, 76.5 inches and 50.9 inches respectively.  The styling of the i8 has hints of the elements of traditional BMW lore. These apparent characteristics include the twin-kidney grilles at the front, but most importantly the car also introduces quite a few elements which are found to be unique confined just to the BMW ‘i’ class. These one-of-a-kind elements are seen in the form of a groove between the upper and lower rear bodywork, wing-like fins at the rear, and blue trim accents. Inside the vehicle, the floating instrument pod and the increasingly modern designs are actually quite simple, but made of unusual materials part of a seemingly environment friendly cause. These materials are reclaimed wood veneer and fabrics using recycled fiber content. 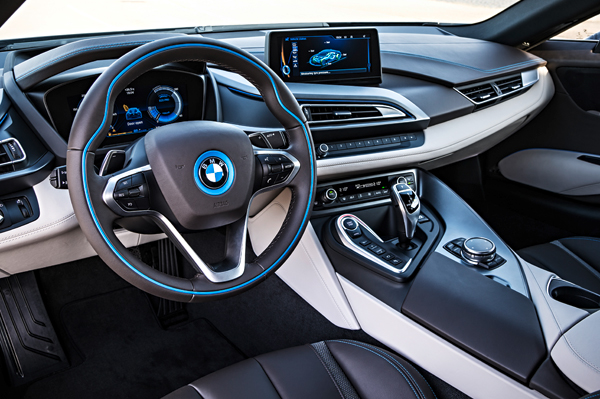 The default driving mode is comfortable, meaning the middle of the three hybrid settings comes into play. With sufficient battery charge, the first few hundred meters at the wheel go under electric power with the front electric motor driving the front wheels. On the infield handling course and surrounding roads, it immediately dispels any prevalent doubts about its ability to deliver appropriate driving traits. It is agile, with somewhat light but direct electro-mechanical steering. 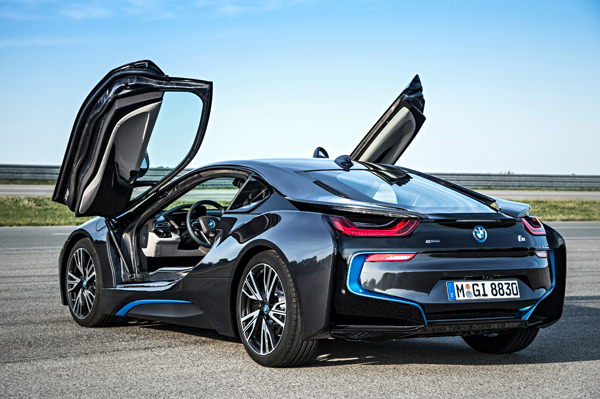 The BMW i8 starts with a base price of around $136,000, which is certainly asking a lot for a plug-in hybrid with competitors like the SRT Viper, Porsche 911 Turbo and Nissan GT-R Track Pack, making it one of 2014’s most anticipated matchups.