Home Car Insurance The Strangest Driving Rules from Around the World

The Strangest Driving Rules from Around the World

Red lights, Seat belts and Zebra Crossings… We all need to follow the rules of the road in order to keep ourselves and our fellow road users safe, but in some countries the driving rules are so wacky, it’s fair to say that their rules and regulations have gone one step too far.

Our latest feature outlines the most far-fetched driving rules from around the world so buckle up; these ridiculously strange rules are set to drive you crazy! 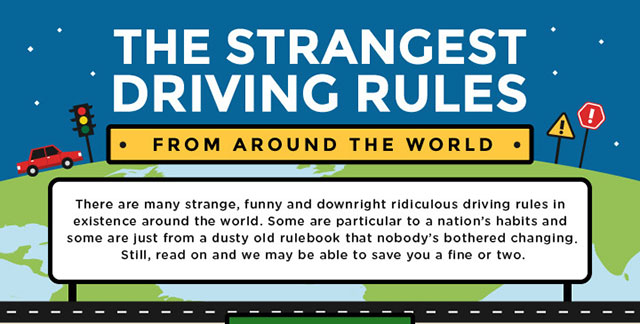 Saudi Arabia is the only country in the world where women are not allowed to drive. While there’s no official law banning them, they must possess a locally issued license and these are not given to women. See what they did there?

In Saudi Arabia, the blame for a car accident can sometimes come down to the nationality rather than who was in the wrong.

In Russia, it’s a fineable offence to be caught driving a dirty car. When is a car deemed too dirty? If someone can write ‘Wash Me’ with their fingers on your car that’s a pretty good indication, we think.

In Manila, if you’re driving on a Monday and your number plate ends in a ‘1’ or a ‘2’, well you better get off the road as it’s not your day. Then, on a Tuesday those ending in a ‘3’ or a’4’ can’t drive and so on. Confusing stuff.

As tempting as it sounds, try to resist placing human faecal matter on the side of the highway. This is illegal. Can we make this illegal everywhere actually?

Another road side rule here. In West Virginia, they don’t allow you to eat roadkill. Ah c’mon!

It’s illegal for a driver to be blindfolded. Fair enough, that does make a lot of sense actually.

In Cyprus, you can be fined for eating or drinking while driving and that includes water. Better hope it’s not too hot a day.

So, it’s a hot day and you’re not allowed to drink water when driving. Someone pulls out abruptly in front of you. Perhaps you gesture in a slightly aggressive way? Wrong. In Cyprus, this could earn you a €15 fine.

In Mexico, you can just buy your license. Never mind a driving test. Not very reassuring but it’s set to change so grab your license while you can.

Bicycle riders are not allowed to lift either foot from the peddles in case they lose control. Curious rule.

They’re a very considerate bunch in Japan, so much that drivers are required to slow down when passing puddles if a pedestrian is near. Irish drivers could take a lesson here…

In another compassionate move for the Japanese, it could be an instant fail of your driving test if you don’t check for cats under the car before getting in. Cute.

Oh India, where to begin. Sure, there are many road rules it just doesn’t seem like anyone sticks to them. There are more road deaths in India than any other country in the world. A British Medical Journal Study states that 37% of these deaths are pedestrians.

Traffic lanes appear to be a rough guide as weaving in and out of traffic lanes is the preferred driving method.

If you get into an accident make sure to yell and curse first (yeah you heard us, curse) as this is a sign of innocence.
Seats are just the starting point for passengers, after that its car bonnet, roof and hanging off the back.

Horns are used at all times to say many different things.

Nepal Police officers do not always carry breathalysers and rely on a sniff test to determine if the can smell alcohol.
In Kathmandu, there is a zero tolerance for alcohol, so not even the smallest drink before driving is allowed. 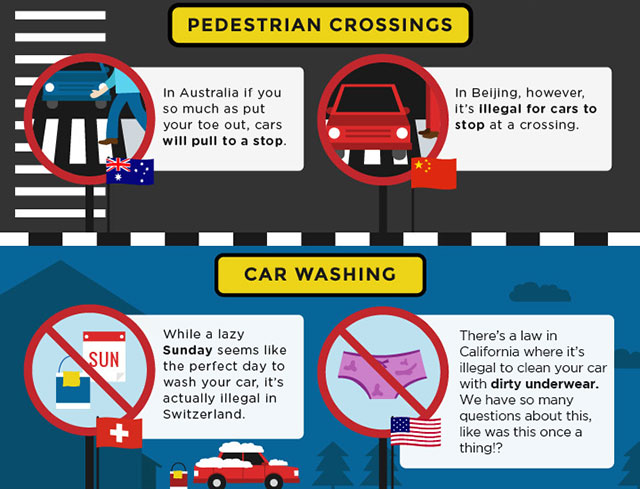 There must be an epidemic of sleep walking in Denmark, as the law states that before embarking on any journey you must check under your car for sleeping children.

In France, a child must be over 10 years old before they are allowed to travel in the front seat.

In Ireland, pretty much up until the 1990s children could sit in the front or back with no seatbelts on.

Make sure to fill up on the gas before passing through Youngstown, Ohio, lest you break down. It’s an offence and they’ll fine you!

The same can be said for Germany’s Autobahn. Run out of petrol and they’ll kick you when you’re down with an €80 fine. Ouch!