Ever wanted to go on a mammoth road trip from England to India?

Well, that’s exactly what Land Rover have done this year with their latest model of Range Rover Hybrid vehicles.
The cars, which act as a more eco-friendly alternative to older models, have trekked from Land Rover’s Solihull factories in England to Mumbai, India, where Jaguar Land Rover’s parent company, Tata, resides.

Over the course of 53 days, the three prototypes travelled a staggering 10,742 miles over 13 countries, in what must be one of the most ambitious test drives undertaken.

Taking in a vast array of scenery and grand vistas, the journey was through the “Silk Trail”, a 2000-year-old trading route replete with ravenously dry roads covered in rocks and gravel – in other words, the prefect test for a new off-road vehicle.

The Range Rover Hybrid itself was more than put through its paces, with all three of the models suffering 15 punctures, four damaged wheels and four cracked windscreens between them.

The aim of the expedition was ultimately to fine tune the car for its imminent release, collecting 300 GB worth of data detailing its performance. 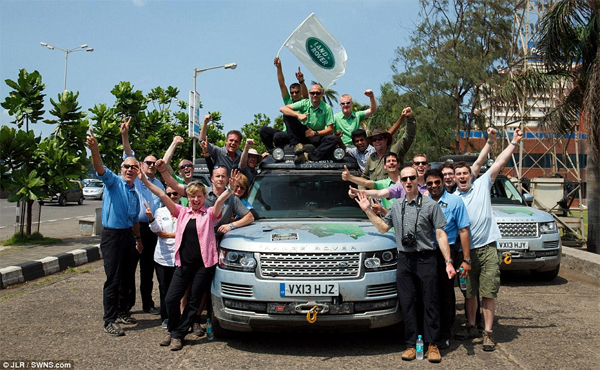 This extra work in tuning the car has led to high levels of anticipation, with Land Rover reviews giving the new model a high rating and critical plaudits for its balance of performance and economy.

A greener car for the future

In an interview with the Daily Mail, Land Rover’s hybrid and electrification director, Peter Richings, said, ”The world’s first diesel hybrid expedition along the Silk Trail pioneered an ambitious route across Europe and Asia that would have been impassable to most other types of vehicle – but no matter how hostile the conditions, the Range Rover Hybrid prototypes took it all in their stride.

“In developing the hybrid-powered Range Rover, our objective was to gain hybrid’s fuel economy and carbon emissions advantages without compromising the Range Rover’s go-anywhere capabilities, its cabin space or its refinement.
“The success of this remarkable expedition clearly demonstrates we have achieved that.”

The car itself is a promising look to the future for the brand, featuring extra fuel economy and an EV (Electric Vehicle) mode that, although only operating for about a mile at a time, is surely set to be expanded upon in other models. It’s a far cry from the gas-guzzling image that the brand has inadvertently cultivated over the past few decades.

But, with new technology comes a hefty price tag, and at £100,000 the new taste of a green 4X4 can currently only be tried out by the driver with a lot of spare income.

Despite this, the Land Rover Hybrid is a showcase of what is presumably an inevitable shift from the extravagant carbon footprint creators of yore into the greener output of tomorrow. And with a road trip illustrating its mettle, you can guarantee you’ll still be getting the same great traction, torque and horsepower that Land Rover is known for.