Porsche has announced the third generation of its premium sports utility vehicle (SUV), Cayenne, which will be offered in four different trims including Cayenne S, Cayenne Turbo, Cayenne Diesel and Cayenne S E-Hybrid.

The standard Cayenne S encloses an all-new 3.6 litre twin-turbo V6 engine with improved performance and fuel economy. Moreover, the exterior encompasses some notable changes, among which the front air inlets are the most prominent. These not only add to the elegance of front fascia but also help cooling the engine area. Moreover, Bi-Xenon™ headlights improve the refinement of the SUV.

Coming to the Porsche S E-Hybrid, it is the first plug-in hybrid vehicle in premium SUV segment. Using a lithium-ion battery coupled with an electric motor produces 95 horsepower, which is double than the power of previous Cayenne S Hybrid. This lets the vehicle to reach an all-electric top speed of 125 km/h. Cayenne S E-Hybrid also holds a 3.0 litre supercharged V6 with 333 horsepower output. 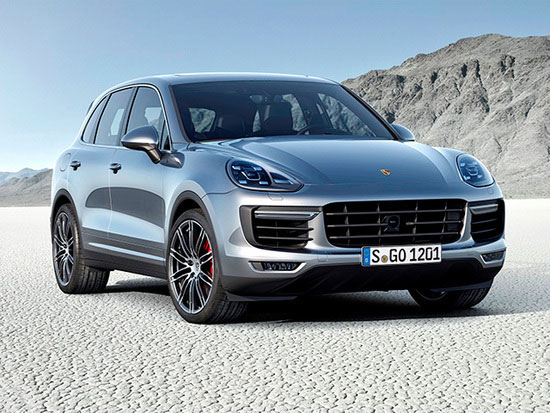 The only diesel version of Cayenne encompasses a 3.0 litre turbocharged V6 engine that produces 240 horsepower and 550 Nm torque, allowing a top speed of 217 km/h. Cayenne Turbo is another distinctive and the most robust variant in the lineup. It carries a 4.8 litre eight-cylinder engine with 520 horsepower and 750 Nm torque. Porsche Cayenne Turbo records a top speed of 278 km/h.

In precise words, the next generation premium crossover SUV from Porsche is optimized for more comfort, performance and style.