The Americans dreamt and Dodge delivered. The 2014 Charger is being hailed as finally the vehicle that has the potential to restore their faith in a well-engineered American family car. Not only that, the Charger also presents the illusion of deceiving looks. Not at all a book that should be judged by its cover, the 2014 Charger is a wolf with a sheep’s exterior. This model is slated to be another reinforcement of the Charger legend that takes the name past even more boundaries.

With seven available models, Dodge has given the customer a real headache in this regard. We will be giving the basic information on four of those models.

Due to the variety of models offered, it is pretty difficult commenting on all of the models at once. Hence we’ll be giving a general overview of which model hits the mark performance-wise and which model misses. The basic choice is between the V-6 models and the V-8 versions, with the latter obviously being the high performer. Chrysler’s new 3.6-liter Pentastar V-6, dishing out 292 horsepower, is what powers the basic Charger models, but really pushes the limits of impressiveness is the very smooth and responsive eight-speed ZF automatic. However, for those who just need pure scorching performance, the obvious choice would be the SRT with its 6.4-liter HEMI V-8, with 475 horsepower. The only blemish being that it sports a five-speed automatic, it is still good for 0-60 mph times of under five seconds. 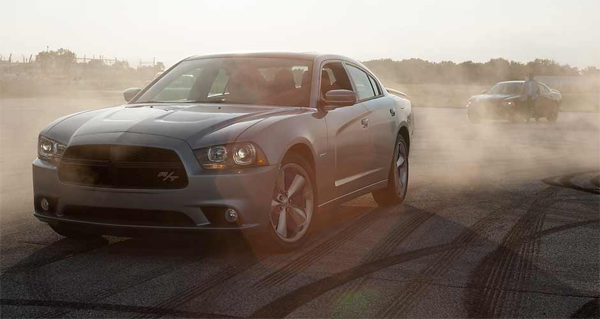 The 2014 Charger has every right to call itself a standout in a crowd, especially in a crowd of its segment. The car has all the means to be labelled a muscle car with its crosshair grille, prominent bar of LED taillights, Coke-bottle silhouette and relatively higher beltline. It offers a combination of both retro as well as modern style perks, especially from its rear and profile. Inside, the Charger has got sufficient room even for tall drivers, while the roof can be found to be a bit low on the back. The interface is an 8.4 inch touch screen with easy to operate buttons while room on the backseat is something hard to come by due to the elongated transmission tunnel. Overall, the inside complements well with the brash exterior, encompassing everything required for a sedan in modern life.

The standard 3.6 Litre V-6 engine gives a pleasant drive, while it is strongly advised that it be paired with the eight speed transmission to achieve the wholesome enjoyable experience. The only negative being that the only V-8s available in the segment are paired with the five-speed transmission which, frankly speaking, puts them quite behind the competition as well as modern trends. The suspension does its work well with a smooth ride even on rough pavements, and the feeling can be further amplified with the 20-inch alloy wheels. Body motions and stability are well controlled on the corners, making the sedan a perfect package for family driving purposes. For even more fun, the sportier models will have to come in play.