Chevrolet have released walk around videos to show off the exterior features of the new 2015 Chevrolet Tahoe as well as the Suburban. The video has Chevrolet exterior designer AlexandreHenriques describing the designs of the two SUVs as ‘more refined and precisely sculpted’. Unveiled at the 2013 Los Angeles Auto Show three months ago, the new versions of the two models sported dual tiered headlights and bold grilles that are not that far from the designs of the previous models. However, Chevrolet does claim that no single exterior metal sheet or lighting element can be found in common between the automaker’s full size SUVs.

Stressing on the fact that the designs of the SUVs are hint to their ‘greater functionality, technology and refinement, Henriques describes how the new models effectively convey Chevrolet’s brand heritage. The engine bay of the two SUVs houses a 5.3 litre V8 with 355 horsepower and 383 pound ft of torque, which is although quite an improvement over the brand’s previous models, is still behind the competition in this regard. That is why Chevrolet swerved to compensate with an exterior that will set the vehicles apart. 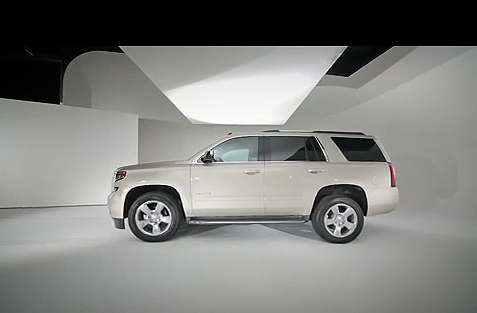 Hence the videos highlight the new inlaid doors, improved aerodynamics, reduced mass with the light hood and panels, all contributing for an enhanced efficiency. The Chevrolet signature dual-port grille is still around, with projector beam headlamps flanking it on the sides. Both models will roll off assembly lines in GM’s plant in Arlington by the first quarter of 2014.