Reaching the climax of Chevrolet’s current performance cars lineup, General Motors plan to unveil the 2015 Corvette Zo6 at next month’s North American Auto Show being held in Detroit. The 2015 Corvette is GM’s answer to Ford’s announcement of the release of the 2015 Ford Mustang. The automaker is aiming to blow their customers away by offering them more choice in performance cars than ever before; from a brand that many claim is the most popular performance car brand in America with one out every four car being sold bearing the Chevrolet tag.

Playing it quite safe or being overly cheeky, the company has released a teaser image showing just the car’s wheel right rear wheel. On the powertrain, it is apparent to all that the Z06 is designed to levels of performance found mostly in supercars. The C7 model made leaps and bounds over its predecessor in terms of horsepower and overall engine performance. Hence it will come as no surprise when the C7 Z06 will make great headway in that regard. 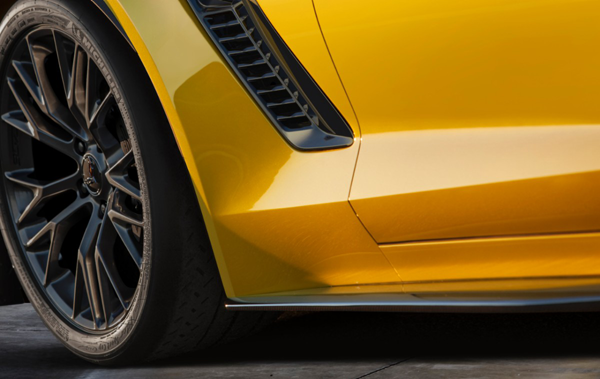 The Z06 is one of four redesigned Chevy performance cars that GM hopes will make the push into the fast car category to bolster the Camaro which has been leading the field for the past four years.Chevrolet hopes to extend that lead to pull away from the competition in sales banking on the popularity of the Corvette brand, and the high performance attraction that the latest model will offer.