Infiniti has come up with another benefit they can reap from their partnership with the Red Bull Racing team in the Formula One. Paired up with the face of racing today, Sebastian Vettel, the automakers have certainly found the limelight with regard to high performance cars. Hence the company has announced it will be releasing an F1 inspired concept car that will be based on the premium sports sedan, the Q50. The car is slated to be a high performance version of the Q50 and is named after the notorious corner at the F1 racing track in Spa-Francorchamps, the ‘Q50 Eau Rouge’.

The teaser image released by the company certainly suggests speed. Banking on experience in F1 racing with the Red Bull team, the car has certainly been fitted with the correct aerodynamic features and design elements that assist it in achieving the desired speed. However, that is all that is known as yet, and it is not the cosmetic changes that basically determine a car’s speed. The basic Q50 sports a horsepower of 328 and 269 lb-ft of torque, so it goes without saying that the ‘Eau Rouge’ version will take it up a notch. 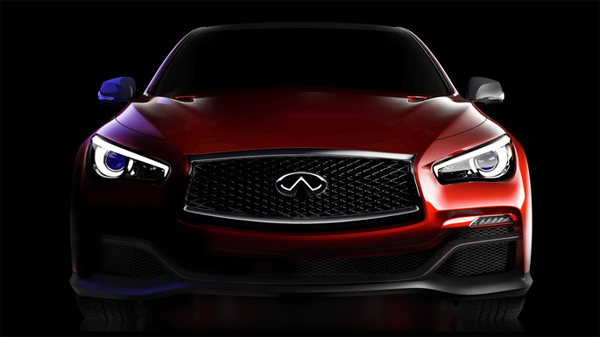 Infiniti will be revealing the concept car at the North American International Auto Show in Detroit next month. Sebastian Vettel certainly helped a bit with the tweaking of the basic Q50 and also went on to win this year’s Belgian Grand Prix (home to the Eau Rouge turn), but it is too early to know whether this car will be another reflection of his speed.