Two of the Honda’s major distributors in China, Guangzhou Honda and Dongfeng Honda will jointly contribute in the upcoming Beijing International Automotive Exhibition 2014. They will display several new concept models on the occasion including Honda Spirior and third-generation Honda Fit. Apart from them, several new models including CR-V, JADE, CIIMO, Civic and Elysion will also make a joint appearance on the show.

Honda’s Chinese divisionreleased a colored sketch of its key concept called ‘Spiria’. Honda Spirior is the Chinese version of Honda Accord. The other revelation is the next generation Honda Fit. Fit is first midsize SUV from Honda that is already supplied to Japanese and American markets, and will now debut in China. 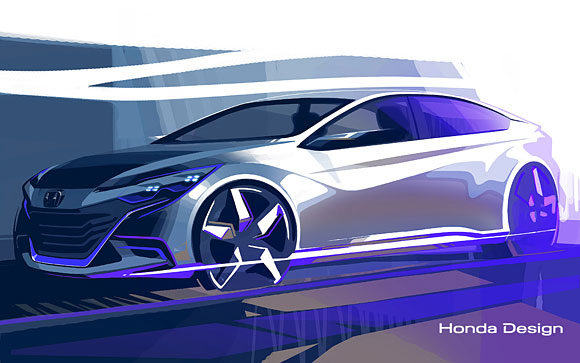 Honda’ lineup of vehicles is expected to be accompanied by Acura’s production versions of MDX, ILX, NSX and RDS. 2014 Beijing International Automotive Exhibition will start from 20th day of this month and will continue till 24th April. As the exhibition will start with the Press Day, Honda will conduct a press conference at its own booth on April 20 at 9:30am. It is yet to see whether new concepts from the Japanese automaker would be able to catch the eyes of more than 800,000 audiences and 4000 media officials.