Porsche 911 GT3 has stolen one of the World Car Awards (WCA) at 2014 New York International Auto Show, just before the main event. At this occasion, the CEO and President of Porsche Cars paid his gratitude to the organizers and dedicated the award to the designers and engineers.

Fifth generation Porsche 911 GT3 was chosen out after a close competition with Chevrolet Corvette Stingray and Ferrari 458 Speciale. The decision was made by a jury of 69 automotive journalists from 22 countries. Porsche retained the title of World Performance Car for the third consecutive year. 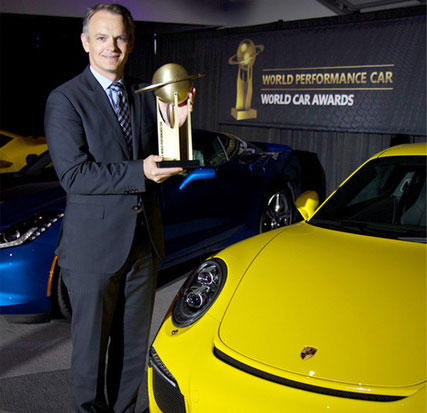 Technically, the fifth generation Porsche 911 GT is powered with a 3.8 liter rear mounted six-cylinder engine and seven-speed Porsche PDK transmission. With 475 horsepower of heat, the sports car records a top speed of 314 km/h. Overall, the latest 911 GT3 is completely redesigned to be light in weight, more powerful and fuel efficient than ever before. Other major adjustments in the vehicle include active rear wheel steering and wide front track.