There have been some tales about Tesla’s Semi Truck’s travelling from one city to other within US in the recent past. But now this piece of innovation seems to achieve a milestone by traveling thousands of miles alone. The Semi made an appearance at the headquarters of a trucking giant J.B. Hunt. The CEO of J.B. Hunt, Elon Musk, seemed to be convinced towards the cross-country movement of Semi truck without any escort. Based on Electrek’s report, Elon has indicated a positive prospect about the serviceability of the product for the trucking brand. Semi truck is actually using the network of superchargers established mainly in US by Tesla, for its energy intake. 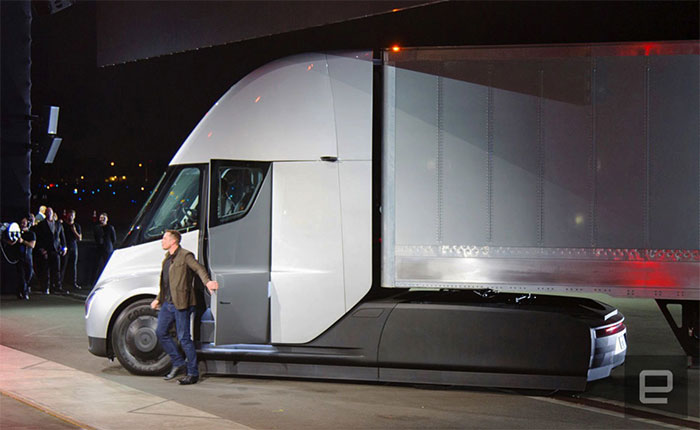 As far as charging mechanism is concerned, Semi uses a connection of various cords, which are plugged into Semi at various positions simultaneously to fully charge the giant battery. This supercharging network, no doubt, has proved to be fine for the Semi’s operation. But Tesla has planned to bring mega chargers into the field for such a massive object. A valid explanation for mega chargers to be inducted is that charging the Semi’s massive battery with superchargers may rise some concerns about the charging time and other performance parameters.

This alone cross-country adventure by Semi Truck will surely act as a force of attraction for potential customers like J.B. Hunt. But there are still many loop holes in this concept. Most important of all is about the availability of dedicated mega charges for Semi. As long as mega chargers don’t come in the game, the superchargers’ network will be the only available charging source. Secondly, it will be worth considering how the Semi will be dealing with the diverse field situations for various trucking companies. In short, the venture of Semi truck has put forth new hopes about efficient and innovative transportation means but many uncertainties are also a part of the package.