Tesla Model X had Autopilot on Before Deadly Crash

Tesla Model X was running with autopilot activated before crash last week according to sources. The vehicle apparently has its semi-autonomous feature turned on before it crashed into a highway median in Mountain View on Highway 101. The driver, a software engineer at Apple, had a grip on the wheels six seconds before it collided with the other vehicle in California. 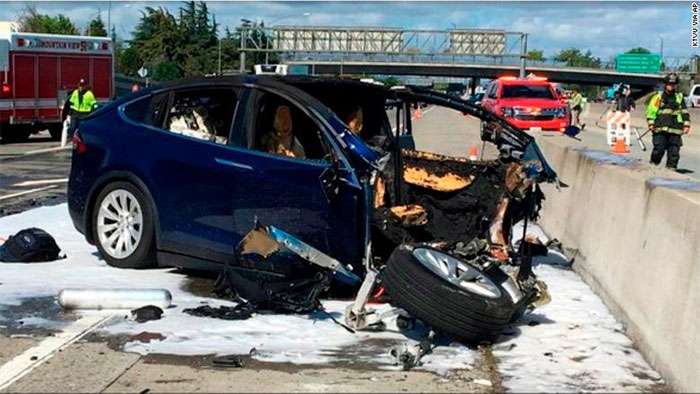 Despite several visual alarms and audio signals from the SUV’s Autopilot system, the driver did not have his hands on the steering wheel, something that is being regarded as one of the possible causes of the wreck and the driver’s consequential death.

Tesla reiterated the fact that drivers are told to respond to safety alarms triggered by the vehicle’s system. While the self-driving functionality enables the car to navigate routes, self-park and switch lanes, the drivers must stay vigilant and keep a check on the road dynamics while gripping the steering wheel for better control. This helps avoid harmful accidents that can be life-threatening as in this recent case.

As per investigation reports, the Tesla Model X had autopilot turned on before crash despite the car having received high safety ratings by federal regulators who had also labelled it as the safest SUV.

The untimely incident has been followed by a 22% drop in Tesla’s shares for the last week of March. There have been earlier reports of the company’s semi-autonomous autopilot technology being a dominant factor for car wrecks.

Earlier this year, there were news about the impingement of Model S sedan and a fire truck on a Californian highway. In the 2016 crash, investigation reports by the federal authorities revealed that the Model S’s autopilot was the primary reason for the accident.

The automaker claims that the autopilot feature, however not built to prevent all wrecks, reduces the risk of such incidents to a great extent as highlighted by statistics that provide a comparison with vehicles without the self-driving feature.

When Should You Switch From an Infant to a Convertible Car Seat?