As technology giants and automobile manufacturers work to develop driverless cars, have you ever thought what will you be doing while your vehicle takes turns autonomously? This is exactly what Frank Rinderknecht, the founder and Chief Executive Officer (CEO) of Rinspeed, discussed during the 2014 Geneva Motor Show.

It is obvious that you would not want to just sit idle, watching the traffic and witnessing your car taking you to the desired destination safely, killing the whole purpose of driverless cars. Rinderknecht believes that you will be able to do anything you can imagine including eating, sleeping, working on your laptop or may be just chatting to your friends, just like what you do to kill time in a train or an airplane.

Google, the biggest technology leader, is working on a machinery that ensures efficient performance of driverless cars, while a few automakers around the world are utilizing their resources to develop autonomous vehicles.

The Rinspeed CEO believes that it is about time the carmakers start educating people about the experience they will be having in driverless cars, as the sales are likely to begin in the next five or six years. However, some experts think, those cars might not be totally driverless initially. 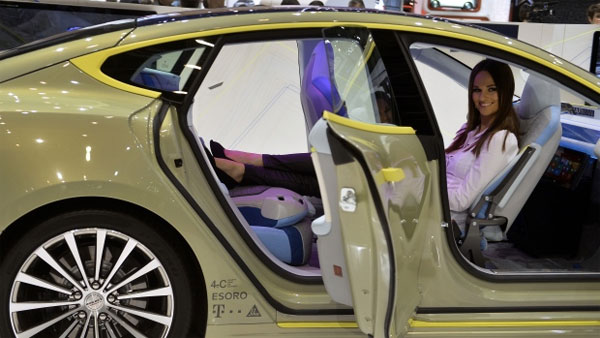 Just to give potential customers an idea about future technology, Rinderknecht’s company has made certain changes to the interior of Tesla’s Model S, turning it into more of a meeting place or entertainment center.

After the revamp, the seats can tilt, swivel and slide into about 20 positions. Apart from facing other passengers in the car, the seats can be adjusted to look towards a 32-inch screen at the back. Changes have been made in the dashboard too, with a massive entertainment system.

There is also a coffee machine in the car, allowing you to have an extremely pleasurable and comfortable ride.

You might think all this sounds too good to be true but Rinderknecht and other experts believe, these things will be a necessity of future mobility.